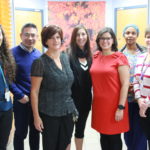 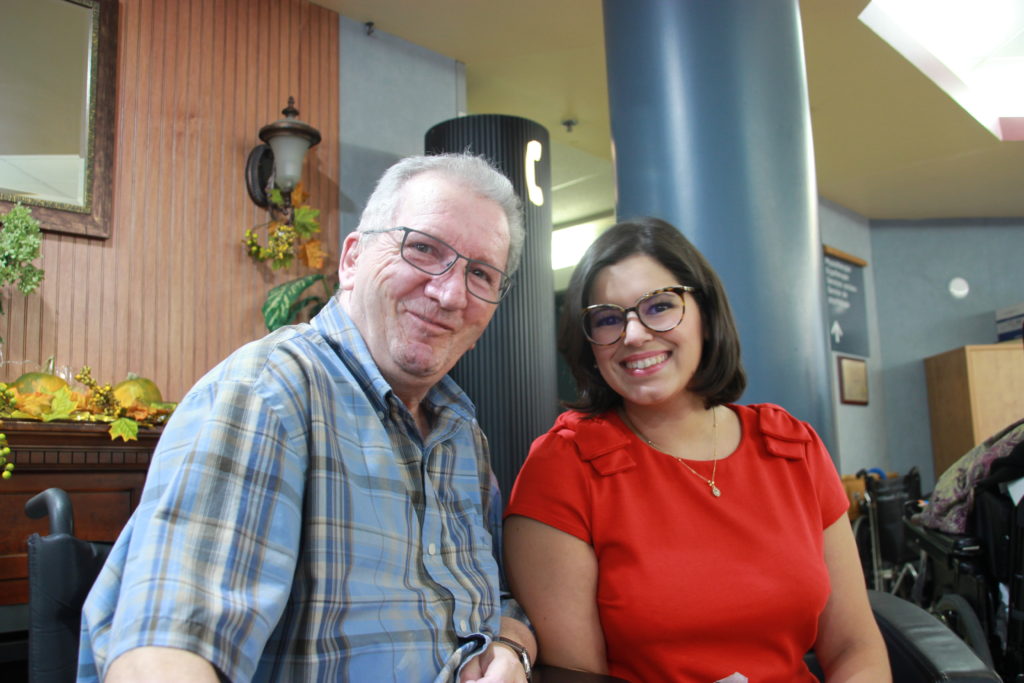 At the Pavillon Camille-Lefebvre of the Lachine Hospital, the right medicine, and the right care, bring satisfaction to the residents and pride to their healthcare teams

More awareness, smiles and autonomy, plus better appetite and mobility—these are just some of the improvements seen in recent months among many of the elderly residents of the Camille-Lefebvre Pavilion (CLP) at the Lachine Hospital of the McGill University Health Centre (MUHC) after changes were made to their care and medication regime.

“Until recently, it was common practice to prescribe antipsychotics and sedatives to patients with Alzheimer’s and dementia,” says Amelia Joucdar, clinical nurse in Advanced Practice at the Lachine Hospital. “However, studies have shown that these types of medications worsen patients’ condition, can cause delirium or make some patients more violent, and are associated with increased risks of falling and dysphagia.”

“From this came the desire to ’de-prescribe’ these drugs and introduce non-pharmacological innovations adapted to residents with dementia,” adds Amelia, who specializes in Geriatrics.

As part of the OPUS-AP project, a departmental research study supported by a grant from the Canadian Foundation for Healthcare Improvement, the Lachine Hospital has reduced the use of anti-psychotics and sedatives in long-term-care patients with major neurocognitive disorders and in those showing symptoms of dementia, such as wandering, repeated demands, motor agitation, disinhibition and aggression. The project had two components: the de-prescription of the drugs and the management of disruptive behaviours.

OPUS-AP has been deployed in many long-term-care centres (CHSLDs) in Quebec. At the Lachine Hospital, it was limited in phase 1 to one care unit of the CPL, which hosts 44 residents, and the project will continue into 2019.

The first step in the de-prescription process was to select residents who qualified to participate, based on the criteria set by the National Institute of Excellence in Health and Social Services (INESSS). To do this, each case had to be evaluated, with a review of the diagnosis and the reason for prescribing the drugs, and a detailed behavioural analysis.

The Lachine team chose to proceed one patient at a time, adopting a multidisciplinary approach to controlling and evaluating behaviours, which can fluctuate with changes in medication. “We took our time,” says Amelia. “This is a key element of the project’s success, as it has reduced the pressure on the care teams, allowed them to closely monitor the evolution of each resident and to see the improvement of their condition.”

Another factor in the success of the project is, without a doubt, the training that was offered to employees. “All caregivers, including PAB’s, have been trained on the different types of dementia and the resulting behaviours. This has allowed them to better understand residents’ reactions and to better respond to them,” says Amélie Rivard, Training and Development consultant, Lachine Hospital Training Department.

In phase 1, once the de-prescription process began for a resident, the care staff observed the patient, sought non-pharmacological solutions to problems and tested them. Staff also filled in behavioural grids to document the dose reduction, the patient’s response, the proposed interventions, and their success or failure with the patient. When an intervention did not have the desired effect, the team took note of it and tried another, until the right solution was found.

“During the day, recreation technicians organize group activities for a variety of interests,” says Amelia. “And we noticed that residents were quieter when they participated because they were busy or entertained.”

“We also observed that from 4 p.m. to 9 p.m. the patients were more restless, so we tried to set up activities to deal with disruptive behaviours during these hours, as there were also fewer staff in the program’s unit. Activities like colouring clubs, singing, puzzles or manicures have entertained the residents without burdening the staff,” explains Amelia.

Most importantly, the teams noticed that as doses of medication decreased, behaviours improved. “Residents had a better mood and better ability to interact. It was therefore both rewarding and stimulating for the teams, who quickly became invested in the project,” says Amelia.

“The benefits can be explained not only by the adjustment of the medication, but also by the contribution of the care teams, which has changed its approach to residents, paid particular attention to disruptive behaviour and set up appropriate activities. Without all that, it would not have worked,” says Louise Papillon-Ferland, a geriatric pharmacist at the MUHC, who supported the Lachine staff in this project.

“Knowing that unit staff were each ready to take on the effects of de-prescription, doctors felt that patients would get the support they needed, and thus participated in the project more easily,” adds pharmacist Philippe Lor, who has worked with the teams on a daily basis.

The collaboration between physicians, nurses, and all professionals has been exemplary and has created bridges that certainly contribute to improved care.

“Today, the staff has the reflex to involve Philippe whenever there is a new admission, so that the medication is immediately reviewed. The staff is better informed and lead with a more critical eye, so they feel confident asking questions about medication,” says Amelia.

Based on their success, the care teams began to review the care and prescribed medication for a larger pool of patients. The Ministry of Health and Social Services also invited the project team to present their results and procedures to the managers of 24 CHSLDs in Quebec.

It is not uncommon for patients over 75 years old to consume 15 or even 20 different drugs. Each patient is different, lives with a combination of different illnesses and co-morbidities, and faces varying side effects and drug interactions. “This is one more reason to perform a complete analysis of the medication,” says Amelia.

In March 2019, residents of the other two CPL care units will participate in the project, if appropriate. In the meantime, other patients who were not part of the target group in Phase 1 benefit from the shift in culture that has emerged from the project. Mario Chiasson is one of them. He ended up in long-term care 10 years ago following a stroke that left him with physiological and behavioural consequences. Based on their evaluation of his case, his healthcare team decided to change his medication.

“Before the change in medication, I was sometimes aggressive, and I’m not anymore,” says Mario.

“I found my good mood again. It is easier to move around and eat. I participate in activities and it feels good,” he adds with a smile.